First Scott, then Specialized. Then come the third "S" in my cycling life.. SHOGUN!

While the first 2 I don't dare to leave it out there while running errands, this bike I built with ease of mind concept. Meaning I can confidently leave it out there and that it won't attract much attention. Worst case if it's stolen, it doesn't burn big hole on my pocket. Having said that, I still keep the bicycle lock out there.

As a result, this was the plan..
1. Single front v-brake
2. Single speed
3. Upright riding posture

That's meeting all the objective and plan except riding town elevation on which I can't determine at this current moment. Why?

Running single speed is a delicate matter of striking a balance of speed and strength. Secondly, chainline.

Striking a balance
The gear ratio is the key element on determining what fit you best for most of terrain you ride. Running it high, you can speed up on flat, suffer on climb. Running it low, you may take any climb, but can't go fast on flat. 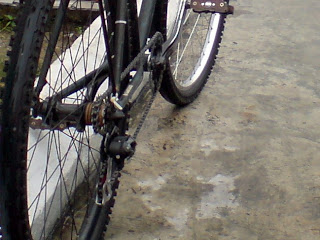 I'm trying on 44T:14T (3.14) ( meaning 1 revolution pedal drives 3.14 turn of rear wheel). On flat and short climb seems not that difficult. I am yet to take it to work where elevation varies.

Chainline
The chainring is ideally to be aligned to rear sprocket, as nearly straight line adjustment as possible. Sheldon Brown has a lengthy explanation on this subject. 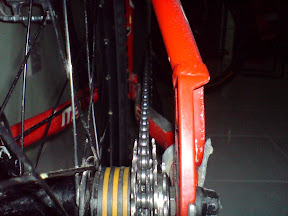 Adjusting the chain line was pain in the ass

If running on cassette type hub, this means stacking a number of spacer to achieve this and probably fitting large chainring in the middle chainring position. 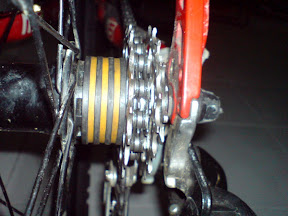 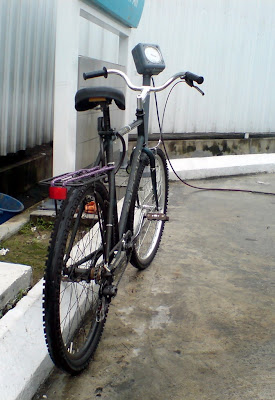 Foot note: Initially I was using "commuting bicycle" on which refer to a "bicycle as mode of transport that we use to commute". It's similar to "jogging shoe" and "running shoe" if we look from the same context. However, commuter in some part of the world means "a piece of transportation equipment used for the transportation of such persons" thus our "KTM Komuter".