We (as in me & Shaq) finished all 4 Friday night ride this Ramadhan successfully. First Friday, Jazlany joined us despite the drizzle a few minutes before the ride. The following Friday, swelled to 30 cyclists. Namely those from Taman Keramat, Taman Melawati and Ampang after an invitation posted by Shaq at jomkayuh.com (not really).

The third Friday, dropped to 20 cyclists. Probably due “unbearable” series of climbing route designed by Shaq. New faces turned up among roadies. The route gets tougher with climbing section from Mahameru to Bukit Tunku. As for myself, Shogun was running 2 speed i.e. 44/15 & 32/15 wasn’t survived that section too. The final stopover was at Middle East restaurant somewhere in Bukit Bintang introduced by Dr Mariam. 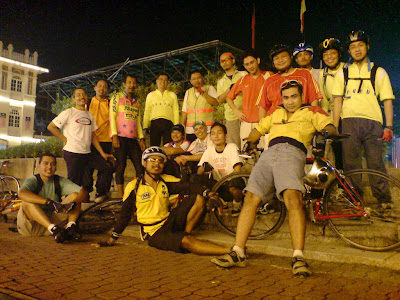 Cyclists of the night 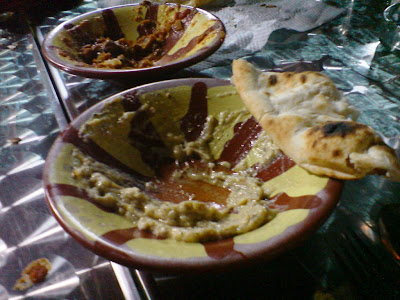 Rekindle my memories during my short work trip in Riyadh with Foul and Humus dishes
More photos here!

I decided to take my Scott for a ride on forth Friday. I suffered tremendously for trying to keep the gear ratio as if I am riding my Spesh (Scott on knobbie while Spesh on semi-slick and 3 kg lighter). The crowd on that night were mostly roadies with bling-bling road bike. New faces emerged, old faces faded away. My shallow mind making conclusion.. “when the going gets tough, only the tough gets going”. Report from Shaq on the next day, those roadies ask for a rerun of the route that very night. I guess a stopover at Doraisamy was the biggest attraction. 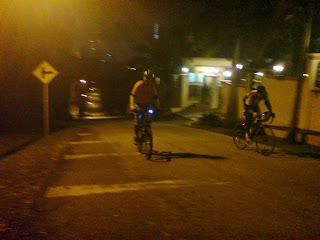 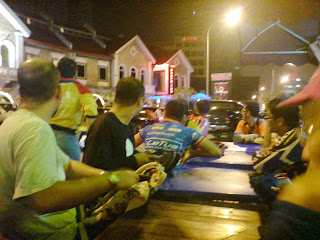 When men turn their heads in 1 direction....