Spinned off from the talk during KEMBAS - Sungai Sendat in November 2013, followed by solo trip up north to Teluk Intan a month later, I (we) materialized an ambitious longer and overnight cycling trip down south to Pengkalan Balak.


There were 4 of us namely BC Kelolo, Anuar and notorious tourer Subki. From my judgement in term of strength for touring, we are in the following order: -

Subki is fast. He is very fast that even he ride on knobbies tyres, he can beat us in skinnies tyres. Having him around indeed was a good knowledge sharing experience for the rest of us.

Our first bicycle casualty was Anuar's crank. We got it fix at K Pro Cycle located at Sungai Sikamat, Cheras. 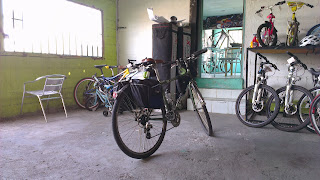 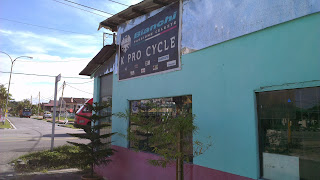 It was a break for us until proceed further to UKM, Bangi.  I had 2 bowls of cendol here to satisfy my hunger and thirst. 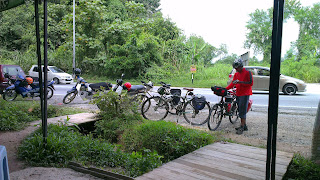 We had lunch and prayers somewhere in Sepang then proceed to PD via Bukit Pelanduk. As the name goes, this part of the leg was hilly and twisty.  As we completed those hilly section, Subki had a flat tyre. His approach of quick patch tube was a failure, just like what I had experienced before. 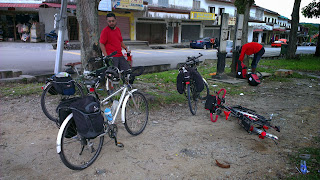 Port Dickson is not as flat as pancake, that was what I learned when we crossed this leg. I guessed it was due to our hectic pedaling for the last 100km had already taking toll on us. 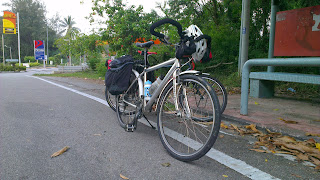 Continuing the hilly section at Pasir Panjang Port Dickson until we stop over for a break at the small town. It was a surprise reunion for myself to bump into an old friend during my bachelorhood.


At Kampung Tanjung Serai, Kuala Sungai Baru we had our prayer break before proceed another less than 20km to Pengkalan Balak.  At about 9:00PM, we reached Pengkalan Balak and had dinner at the food court. I guess at that juncture, any food would be that delicious due to our hunger. At 10PM, we reached the destination. After quick unloading and nice shower, we sleep before continue our return trip journey the next morning.

Photo album
-to be continued-