20080727: Kemensah's first ever bike hash by KLMBH
Jazlany, my cycling mentor adviced me to take scenic ride (as oppose to long ride) for my first bike hash at Pangsun. The main reason, the scenic term can be totally misleading depending on your fitness level.

For this particular bike hash, I took Pak Sham & wife for their first time ever bike hash. For the record, Pak Sham just pickup cycling about 2 months back. They were overwhelmed by the huge turn-up as they reached the RV (Kemensah is consider as backyard trail for most cyclist within the vicinity).

Bike Hash
The extensive explanation is here. In short, it's a trail ride where you follow square paper (if you are taking scenic ride) or rectangular paper (long ride). While scenic last for approximately 12-15km, long ride is can be anywhere around 25km. 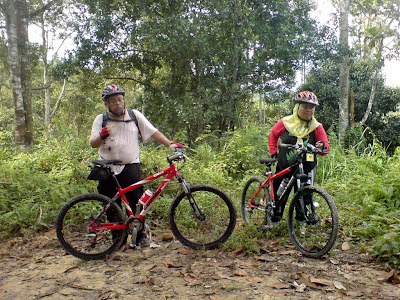 Newbies taking break
The scenic ride from newbie's perspective
Puan Roziah (Pak Sham's wife) was saying, "I was imagining that the scenic ride will has some nice view but all I had was totally the opposite". On which Kelolo's reply was "well, this part of the trail we call the beach" (referring the place further up the hill where it is covered with sandy flat land). I can't denied it was a tough ride for a newbie, at least that's how I felt during my first hash. 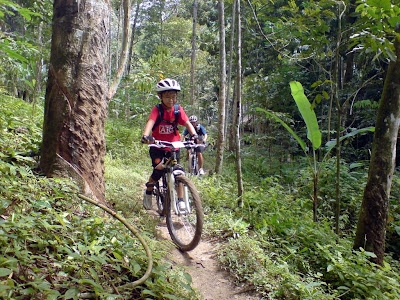 10 year old boy navigating single track
Bottom line
In cycling particularly bike hash, we are not competing against other cyclist. It is a competition against your own capability, a challenge against your own capability and continuously pushing the envelope (another cycling mentor elaborate this in his blog on Pushing the Envelope). Despite feeling tired and wanted to gave up during the ride, both Pak Sham and wife set their mind to finished the ride and they did it! After the sign-off, their comment was they enjoyed the ride and wanted to do more of this next time. On which my reply was, "we can do FRIM or RRI next week".

Even though I missed to enjoy this my-own-backyard hash by taking the scenic ride, the excitement of getting not just 1, but a pair of newbie to enjoy MTB as much as I do, is a different kind of achievement that I found satisfying. After all, I can just do the loop some other time by getting the GPS tracklog from the hares.

Hi ,
You must try the Long Trail since its offer you much much better downhill and scenic view . You can always join us at Curry House Tmn Melawati every Sunday from 8 am - 8.30 am ( that our port b4 riding start )

Thanks for the offer :D
I will surely join you guys some other time.